We caught up with Cassie Quarless and Usayd Younis, the filmmakers behind the documentary Generation Revolution, a film that provides a snapshot into the lives of a new generation of black and brown activists who are working to change the social and political landscape in London and beyond.

Younis and Quarless are working to build ties across communities struggling against similar types of injustices. Building these lines of solidarity, they explain, doesn’t mean flattening out differences and it doesn’t mean ignoring distinct contexts.

Bobby Tee joins the Black Lives Matter Broward Alliance as they host a special screening of the film Generation Revolution. Generation Revolution is a feature-length documentary film that brings to screen the powerful story of London’s new generation of black and brown activists who are set on changing the social and political landscape in the capital and beyond. We speak to members of the Black Lives Matter Movement Broward Alliance and the filmmakers.

Usayd Younis and Cassie Quarless tell Shazia about the new generation of black and Asian activists who feature in their documentary Generation Revolution.

There is baggage living in this [Black] skin

The feature-length film is a contemporary, unapologetic document of grassroots political organizing by a new generation of black and brown activists in London, all striving to change the political and social landscape of the United Kingdom.

Cassie Quarless and Usayd Younis are the co-directors of Generation Revolution, a feature-length documentary about BAME activists who are changing the social and political landscape.

‘Generation Revolution’ Explores Protests and Activist Groups in the U.K.

As Generation Revolution begins its American tour, Quarless and Younis say they hope their film will drive activism by showing viewers that activists are humans, not better or less than anyone. For those looking to start changing injustices around them, Younis recommends the film as a starting point.

The film gives a real time account of activism for young people of color as they are going through the motions of mobilizing. In speaking with Generation Revolutions’ directors Cassie Quarless and Usayd Younis, they provided insight on the importance of documenting the movement right now.

[AUDIO] How Does Social Change Happen?

In partnership with W!ZARD Radio Station, newsPeeks presents #AwkwardQuestions – the show that investigates the difficult questions which need to be asked. Including interviews with the likes of Noam Chomsky, filmmaker Usayd Younis and more, this week’s episode asks How Can Social Change Happen?

Generation Revolution is a documentary film that tells the story of young, radical groups of black and Asian campaigners in the UK. As well as looking at the work they do in helping to tackle racism, prejudice and white supremacy, it also explores the personal growth of the activists at the forefront of the movement, the oppression they face, and the difficulties and stumbling blocks they encounter – culminating in one explosive disagreement which makes for a fascinating watch.

The second edition of the Green and Black radio podcast. Bringing together sustainability, environmental issues and BAME communities.

Generation Revolution follows two London-based activist groups as they strive to change the capital’s political and social landscape. Through their journey, it tells a sad story – the one of blameless black and brown young people being a potential police target on account of skin colour. The feature-length documentary has recently been released in the UK and it is a brave call to action.

The feature-length documentary tells a sad story – the one of blameless black and brown young people being a potential police target on account of skin colour – yet it is a brave call to action. Generation Revolution follows the actions of two London-based activist groups and has recently been released in the UK.

Racism, deaths in police custody and attitudes to homelessness are the targets of protest of this fascinating documentary

Talking to the makers of Generation Revolution: a documentary about London’s intersectional activists

Generation Revolution, a new documentary out in select cinemas this week, was born from a desire to document the “revolutionary moment” we’re currently living through.

Generation Revolution is a new documentary shining a light on the activists fighting for a fairer future. We caught up with the directors to talk about fighting racism, combating gentrification and building a protest movement

It’s a fascinating insight into the world of the activists, and the way they see the world. It contrasts massively with the narrative that millennials and young people are apathetic to the politics of the world they live in.

This urgent documentary presents modern protest and activism in its many guises.

Generation Revolution is a feature-length documentary about the new generation of activists of colour, striving to change the political and social landscape in this country. Ahead of the film’s UK screening run, the filmmakers behind the projector introduce us to the conditions that led to the film’s creation, why they made the film and what they hope it may achieve.

Generation Revolution: ‘We were arrested on suspicion of violent disorder’

“Once you see the injustice in the world, you can’t do anything else but this.”

Usayd Younis and Cassie Quarless, for two years plunged themselves into the world of black and ethnic minority activism to create this insightful film, exploring the new forms of radicalism that have recently fertilised all over London.

As part of Black History Month, the Nottingham New Art Exchange screened Generation Revolution in collaboration with the University of Nottingham. The film was followed by a Q and A with the films’ directors and a member of the Nottingham branch of Black Lives Matter.

Although the mission of each group is as varied as its members, Generation Revolution reveals how conflicting opinions, personal journeys and the rewarding yet harsh realities of being involved in activism affects these young people.

Co-director Usayd Younis goes on BBC Radio London with Dotun Adebayo to talk about Generation Revolution and why it is important in the context of #BlackLivesMatterUK. Starts at 5mins. 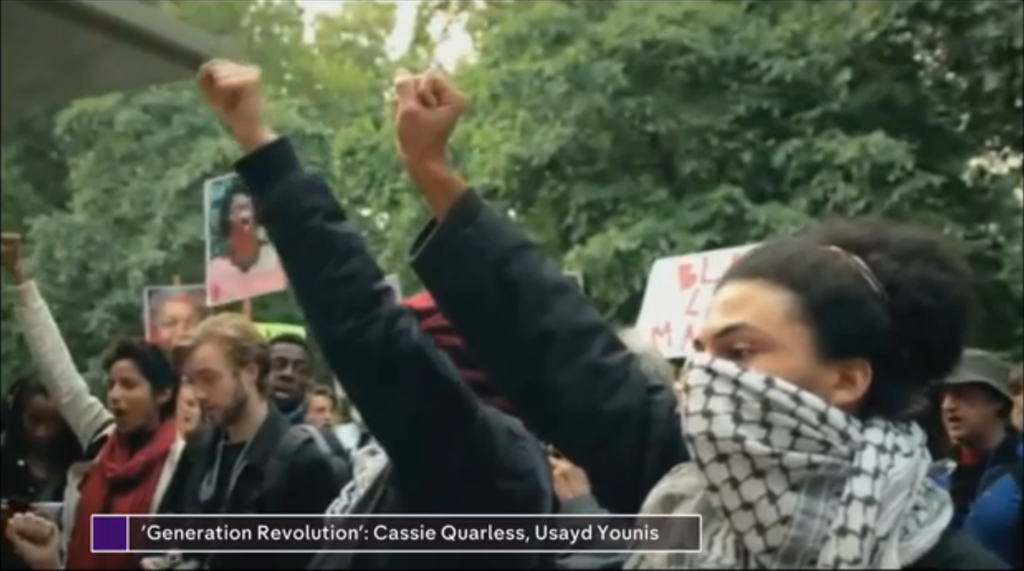 25 staff deported as illegal immigrants has led to a campaign to boycott the Byron burger chain and a protest releasing hundreds of live insects into one of its restaurants.. Generation Revolution referenced as a film about the groups responsible

The new faces of black radical activism in the United Kingdom

generation revolution are fighting racism in london and beyond

It’s an important contemporary document – if it’s rare to see youth political activism treated with respect in mainstream filmmaking, it’s even more unusual to see that of black youth.

A new generation of black and brown activists, tired of their stereotyped representations in mainstream media, outraged by racism and picked by unequal opportunities, militate for a change in the political and social landscape of the UK. This ‘quiet awakening’ has been captured by filmmakers Usayd Younis and Cassie Quarless in Generation Revolution.

Generation Revolution is about far more than police brutality, or indeed racism. Recognising that none of us live single-issue lives, the film charts the struggle of a new generation of black and brown radicals against racism, capitalism, austerity, and patriarchy; along, in their own words, “all axes of oppression”.

Race is not a topic you just cover with an article in a magazine. Decolonisation can’t be reduced to a single issue of STRIKE! magazine. These are matters that have a bearing on every institution and take a role in all of our interactions. The failure to recognise this is something that extends to the white left, which often sees itself as entirely absolved from oppression.

FEATURE: ‘Generation Revolution’ – A Documentary About The New Generation Of Black & Brown Activists

Young. Black. Revolutionary. Militant. Generation Revolution follows London’s black and brown activists as they set about creating change in the capital. The Black Lives Matter movement gained traction across the pond in 2014 and fast became a forced to be reckoned with. With countless protests and riots taking place in various states across the U.S, there has been a social awakening – but it would be naive to say that what happened last year, happened in a vaccuum, only affecting certain parts of America. What was at one point dismissed as a ‘moment’ in U.S history has now become a global movement.

Well, I freely confess that I was wrong. Political activism is very much alive and well among the younger generation, continuing the long historical tradition among black folk, and not only just in the U.S. The currently in-the-making new documentary, “Generation Revolution,” chronicles the work and efforts by young black political activists in London who are determined to change the social and political landscape in the city, and beyond.

In some ways, times are changing. While the recent shootings of Black Lives Matter activists reveal that we have not moved away from America’s racist roots, among a generation of activists and creators of colour, a resistance is being built. This momentum has been captured in the UK in the form of a documentary aptly titled Generation Revolution (currently crowdfunding funds here). According to the filmmakers, Usayd Younis and Cassie Quarless, “while the activists are standing on the shoulders of giants, the activists of today are organising differently to those of the past”.

English: In the last few decades Europe has changed and now it’s a home not only to those who are with a white skin and blond hair. The European population is much more diverse than what we see in the media or among people of political power. Generation revolution is a full-length documentary which aims to introduce the powerful stories of the new generation of black and brown activists in London. The groups in the movie work towards building a world that is free from all forms of oppression. The project wants to raise the thought that we should contribute to make our world a better place.